Relevant to the post apocalyptic horror of our time but aesthetically elevated, Solitude explores the boundaries between desire and motivation. The thrilling plot of films whose theme is about those kinds of disasters is so common that it tends to become a banality. Solitude offers a “slower” approach that emphasizes on the symbolism of everything that happens. The people of Solitude are forced to evacuate their homes and the place they gather is inside the theater of the city.

The disaster and the upcoming acts and feelings of our characters are not just tools for the spectacle to continue but are also the symbolic manifestations of their human needs and desires. The director of the film, Yelizaveta Smith, chose to highlight those needs and desires by placing her characters in a condition of disaster and decline. In situations like that, more complex characters are born and more instinctive feelings are about to be experienced. 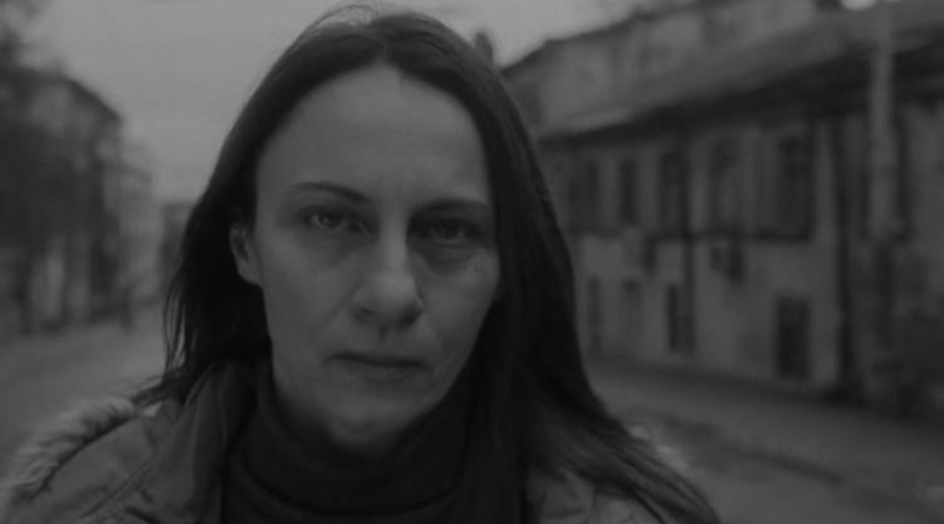 Olena’s Ponomarenko acting lacks the comical and theatrical element that the aesthetic of the film might suggest. This is for me of course a directing problem. Since the film almost managed to remind me of the aesthetic of the Swedish director Roy Andersson I think it would be extremely interesting and promising if the actors had followed his absurdist and comical paradigm. For example if we had more details like this amazing lady with her sansevieria plant.

Old lady with her plant.

Beside the lack of aesthetic absurdism in directing, Ponomarenko uses absurd elements to tell her character’s story. We have the one note playing saxophone player who is a human alarm or the fact that our lead actor uses stage furniture in his room behind the scene of the theatre and other interesting symbolisms.

This is the reason why the need for more details like that was developed while I was watching Solitude. Since the film leans towards this absurdist direction, a more complete artistic take is essential, even if that means that the film takes the way back to a more existential aesthetic, which some consider the opposite of the absurd.

What is indisputable is that one frame is more beautiful than the other and all shots are strong, well lit and perfectly staged which means that the DoP, the director and the art director managed to execute a master film dynamic. An interesting story was told in an artistically successful way and that is why us viewers are given the opportunity to criticise in more profound ways, because an interesting piece of art triggers an interesting discourse.