Postmodern, fresh and funny. These are the first words that come to mind while watching Sassy Mohen’s Fear Actually. While experiencing their decline, a bunch of classical cinematic horror figures attend a group therapy in order to deal with their modern failure.

The social comment of the film is simple and understandable. The new age world is too scary and complex and a horror figure based on fear archetypes, like Pennywise, is impossible to scare anyone anymore. Of course, the news is much scarier than the horror classics like Samara Morgan or the Devil and that is a very amusing idea which is very well cinematically adapted. 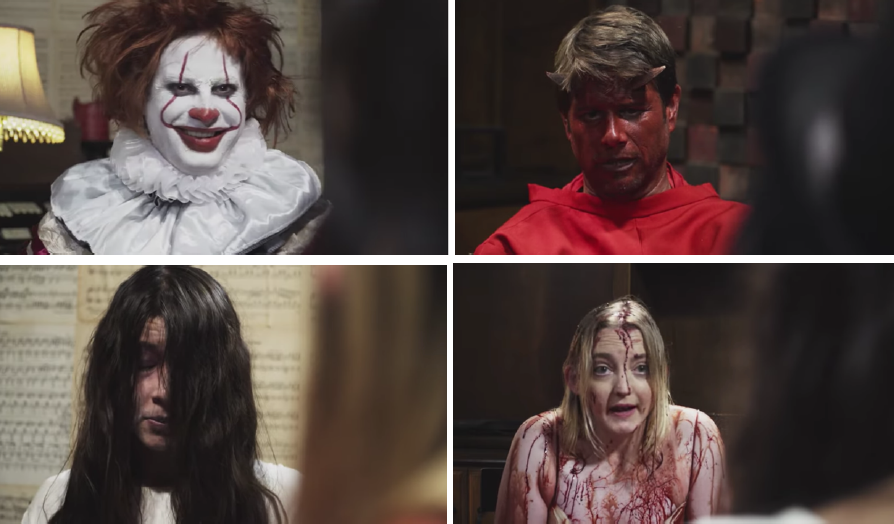 Some of the classic horror figures presented in Fear Actually plus the Devil Archetype.

Concerning film theory, I find very captivating the fact that the director makes that intertextual comment about horror films. Intertextuality and irony/parody are some of the clearest characteristics of a postmodern film. Since postmodernism is there to make room for more than the master narratives, it is clear that we face a cinematic comment. By using those techniques of course, the creative team comments on the terror that we face every day as a society and that we are incapable even to be scared. But beyond the political comment, I believe that the film is an engaging beginning to a conversation about what is going on with horror films.

There are a lot of theorists that believe that a postmodern approach like Fear Actually is nothing but a nostalgic collage of styles and aesthetics of the past. I tend to be more on the side, that states that it is not nostalgia, but an attempt to keep the audience in a state of constant dialogue with the past in order to overthrow the master narratives.

The horror archetypes are too swallow and simple for today. Fear has become a completely different and evolved concept. The figure of Trump is thousand times more scary than Pennywise and that might sound simple but it is not. What "Fear Actually" does, is to start such a discourse and that does not only apply to the political meaning of the film but also to the really difficult question of what makes a film today able to be called a horror film.
All this theoretical analysis has nothing to offer if a film is simply bad and Fear Actually is a very good film in my opinion. It is an entertaining and amusing experience and everyone is capable of enjoying all those funny yet profound intertextualities that are presented in the film. The combination of theoretical and political background but also technical success makes the film great!

My last comment will be that the ending song is very funny.

“I hope that’s what Fear Actually can bring to people. A reminder that even in the worst of times, there is always hope & maybe even some compassion for those unlike ourselves, to be found through humour.’’
(Sassy Mohen)