"Vincent before noon" a short film by "Guillaume Mainguet"

INTERVIEW WITH GUILLAUME MAINGUET Director of Vincent before Noon

Guillaume Mainguet biography:
Graduated from the Rennes-Britain 1 University in Cultural Projects and Programs Development and Management in 1998, Mainguet entered cinema field by promoting independent and arthouse films in different sectors of cinema distribution from 2000 to 2007 in France. Parallel to his first job, he worked as a programer for cinemas and a freelance cinema critic. Then he started working for the Festival of 3 Continents (Nantes) in 2007, first as audiences coordinator then since 2009 as head of its professionnal program, the international training workshop around international coproduction « Produire au Sud ». Since 2008, Guillaume Mainguet is scriptwriter and director ; he has shot several short films screened worldwide : The Shadow of the trees doesn’t exist anymore (2010), Walker (2013), The Girl and the Dogs (2014) premiered in Cannes Director's Forthnight, and more recently The Middle of a Lake (2016) and Vincent before Noon (2019). He is currently developing his first feature film Green Woods, with Paris based production company Acrobates Films. 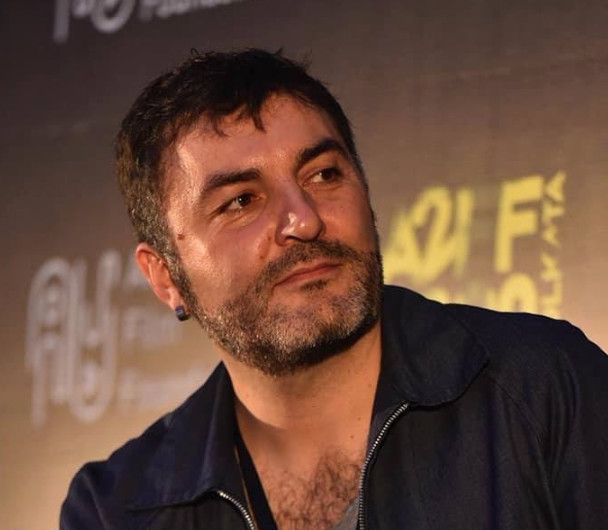 A father pays his son a visit after years of conflict and turns up in the middle of his house move. The son Vincent reacts violently to that intrusion. Emotionally weakened, the father involuntarily reveals the true reason of his visit, which revives the tension between them. Within a few minutes, the anger, the memories and the crossed looks move the two men deeply.

-"Roses in the field" an orginal song for the film, singing by the director: Guillaume Mainguet, composer of music: Erwan Foucault. Vincent avant midi OST