This is a story of escapism from a boring, ordinary reality into a fantasy world for the sake of love. Justin Ho, the writer and director of the film guides us to a journey into fantasy where the hero will sense the fictitiousness of his utopia which will dissolve before him in an enlightening manner. By doing so, Justin Ho reveals to us, not only the scenery of his personal fantasies, but also his inquiries about what is real, as well as his subterranean criticism of escapism in the form of virtual reality.

Escapist is a person who indulges in a mental process of emotional diversion by means of entertainment or other kinds of leisure activities to avoid or retreat from what is considered an unpleasant or unacceptable reality. 1 Escapism can be perceived as a reverse manner to deal with reality, by evading it. Escapism adopts a wide spectrum of evasion variations; from dwelling in fantasy to flee in art, favorably literature, to dive in meditation or to lose yourself in hallucination.

There are theorists who consider escapism as a rather negative intellectual choice or practice2, as a way of avoiding or hiding from reality. Others consider it an artistic accomplishment if in the form of art it opens an exit (exodus) from reality. Henry Matisse said that art is an escape from reality. We can understand escapism as a romantic way of fleeing from mundane reality to a private utopia, which can be blooming or perilous. Either way, it launches a journey and a journey is always adventurous and promising. The urge to escape is constant but the means vary and pullulate. Virtual reality applications and games have provided a very accessible and persuasive way to depart for reality from the convenience of your computer.

Kylie is a young guy, who leads a very “normal”, boring life, working in a company, with a rather tyrannical boss and a tedious daily routine. But within his working environment, there is Allyson, the object of his desire.
Here the exit, the “rabbit hole”, from his routine into fantasy, is provided by technology, in the form of a “reliable” virtual reality game. It is called “Relief” and “some therapists use it for treatment”, says his fellow worker. This game provides you with a wearable camera which records reality and gives you the possibility, via another device and elaborate processing, to reconstruct and experience reality again in your own way. The director here feels the need to set limitations to this transport, which theoretically could be gratifying. He sees that a serious danger is entailed in transporting boundlessly between reality and fantasy, that of losing reason (“If you stay there very long you risk going crazy”!) In doing so he gives us a hint of skepticism about the nature of fantasy and the practice of escapism.

His hero, Kylie seizes the opportunity to escape and tries “Relief” without any hesitation. He uses the game not only to eliminate all those small daily annoyances that make his life difficult, but mainly to reconstruct a reality where his wishes can come true. In his virtual private reality he can achieve whatever he cannot in the real world. Principally, he is able to overcome the enormous difficulty he has in expressing his affection to Allyson. There, in his virtual environment, he grants himself the precious opportunity to express his desire, even to touch and kiss her. Kyle's ideal world is where reservations and hesitations are lifted, those before seemed as insurmountable obstacles in approaching Allyson. It is a plateau of bliss where he reconciles with his own desire and he achieves to handle it. The travels from reality into fantasy and back are not made in the film in a solemn way, nor do they at any moment take on a sober, dramatic narrative tone. Everything is done in a light, playful mood that makes you feel familiar with the hero and his sufferings.
Allyson will encourage him to “Come and tell her this in the real world!” But the hurdle is insuperable: “-I can’t”.

Sadly, the time limitation of the game repeatedly interrupts his fantasy, before completion and Kyle obsessively looks for ways to hack it, so as to prolong his stay in fantasy and deepen contact with Allyson. His colleague breaks the code and provides him with this opportunity. While it seems that his wish will eventually be satisfied, as he is now alone with his imaginary Allyson and has plenty of time, a major reversal occurs; The ideal clone of Allyson, who used to show tolerance and respond to Kyle’s desire, notifies him that she is “fake”, a virtual dummy! 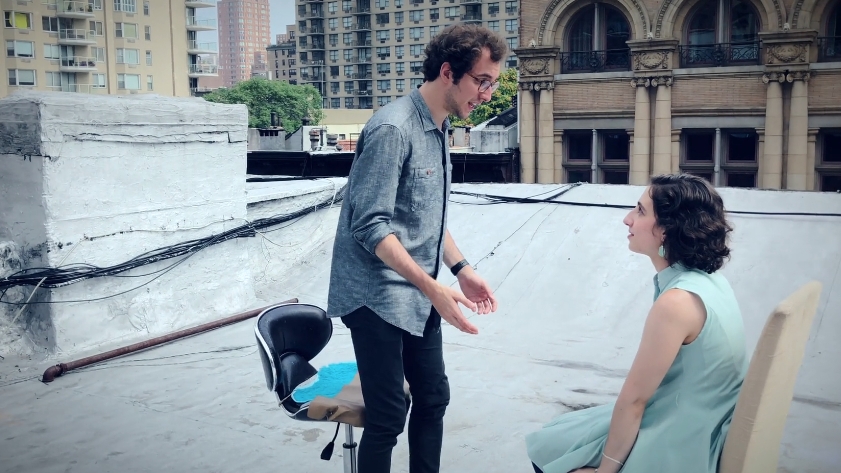 Here Justin Ho demonstrates total refutation and deconstruction of Kyle’s fantasy. He does not expose an accidental diminish of the fantasy, nor does he invent a reason from reality to shatter it, but he reveals the inherent and structural inefficiency of it. Fantasy is fake, which means it is ontologically inadequate and insubstantial.

It is notable that the deconstruction of the fantasy and the realization it is futile to invest in it do not come as a downfall, as an overwhelming frustration; they emerge as a didactic realization, even as enlightenment. Kyle, even though his fantasy has been diminished, does not fall into depression; he does not become evil, revengeful or self-destructive. Instead, he displays remarkable maturity and greatness, now actually performing the opposite deeds from those he fantasized. He gives Allyson’s boyfriend money to take her out and treats his boss with superiority. He solves his problems instantly and miraculously the possibility to have Allyson emerges through her promising smile, as a reward for his peculiar enlightenment.

This is a revealing scenario choice which shows that Justin Ho has confidently opted for reality merits and he has even acclaimed his selection with cognitive elucidation. His hero performs a pleasant landing and acceptance of reality that has something of the soothing effect of a “catharsis”, in a low dosage and in a modern, youthful filmic language. The deconstruction of the fantasy takes the form of an enlightenment as it offers the hero a new perspective to reality that makes him more competent to face with ease the obstacles that until recently seemed insurmountable. The fantasy, when dissolved, does not leave a dark and unpleasant reality but illuminates the ability and power of the hero to easily manage it in his favor. So, it leaves a sense of optimism expressed by Allyson's promising smile. The escape from reality to fantasy and the retreat to reality here essentially launches a new perspective of reality; and in this it constitutes its optimistic character. It could even been taken as a coincidence, but the word “Catharsis”, used by Aristotle in Poetics only once1, is translated in English as “relief”! 2, homonymous to the virtual reality game name! and in meaning it bears a nuance of elucidation.