We enter a suffocating silence. Color has been removed from the visual narrative, sound has been deprived, almost our breath has been taken.
A woman in a bathroom, a woman who stumbles, who takes a pill, a woman who has the shadow of an unbearable burden inscribed on her face.
Immediately the cross she carries is revealed.
She is a woman, a mother, with a paralyzed, non responding boy.

The next shot shows us a modern pietà. 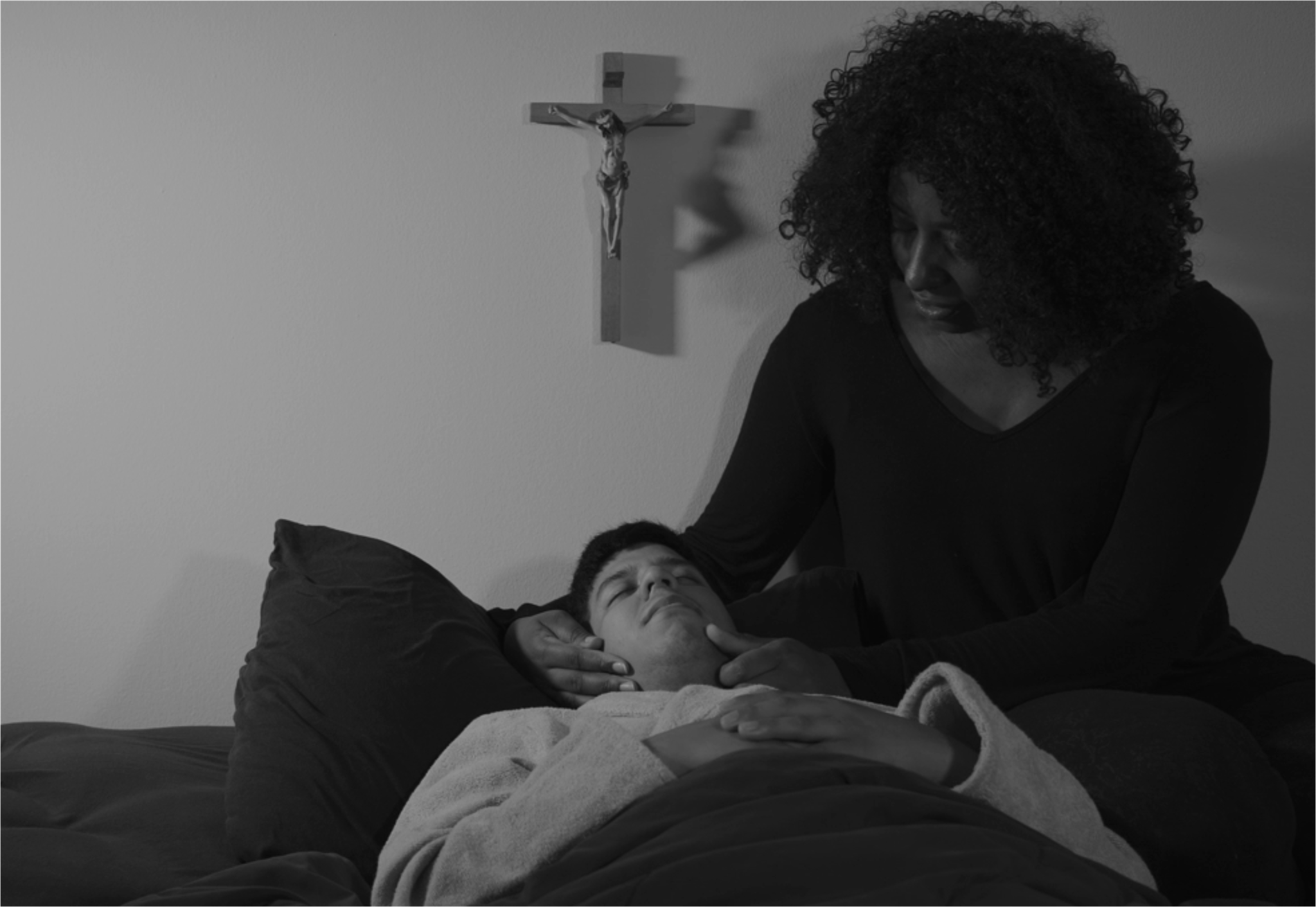 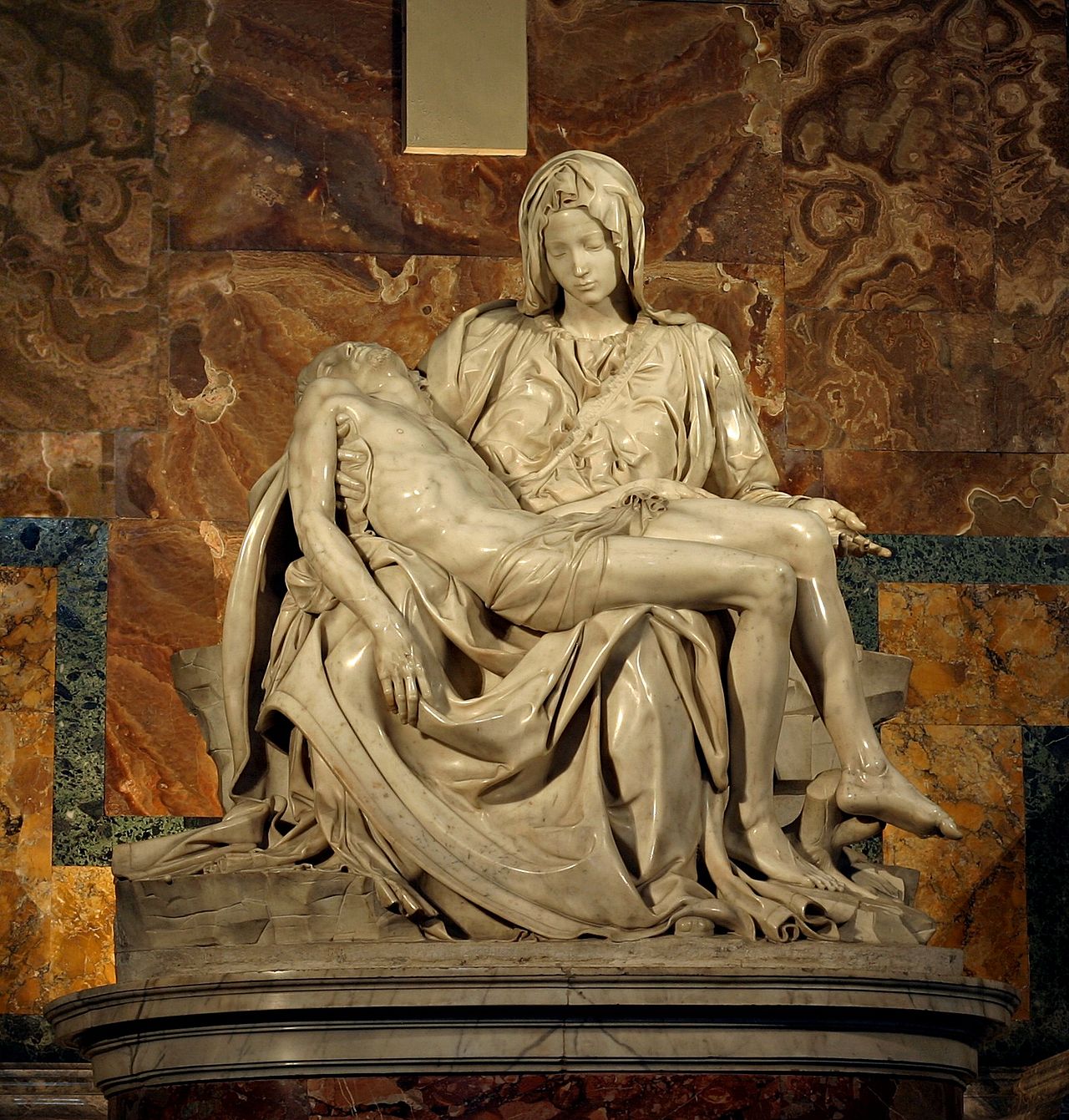 No sound coming.
The silent narration continues with short text phrases appearing on the screen.

These phrases seem to substitute moving images. They appear on black, one after the other, in the center of the screen and then in the corners and again in the center. They describe the daily practice of supporting a paralyzed, non responding patient. These phrases substitute actions we don’t see. They appear on a rhythm that corresponds to the succession of these actions.

The text phrases offer sanctity to the actions they describe. They make it evident that we are not dealing here with a common nursing care service but with a sacred practice; the transformation of a daily practical care into a sacred ritual. And even more. This sequence of hidden actions, which is revealed to us as a sequence of appearing scriptures, is an intense chatter that preludes, as a preface, a magnificent shot that follows. This intense chatter somehow reminded me of the music flow in the beginning of Bach's St John Passion (BWV 245) which is an ingenious preamble for the spellbinding cry “Herr, unser Herrscher” by the choir that is following.

In David Matthew Johnson's film, this magnificent shot is a scene from the Deposition (of Christ). 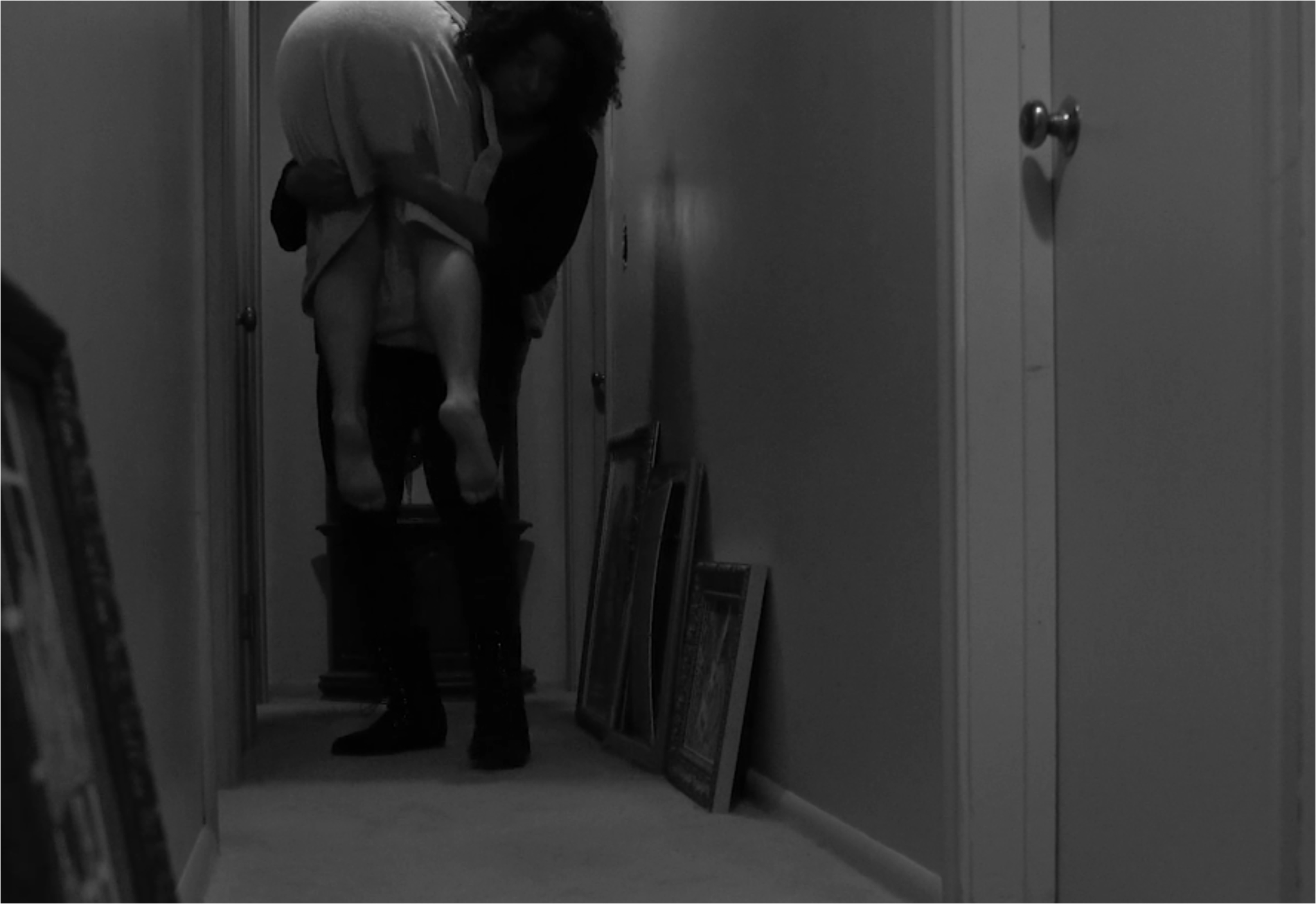 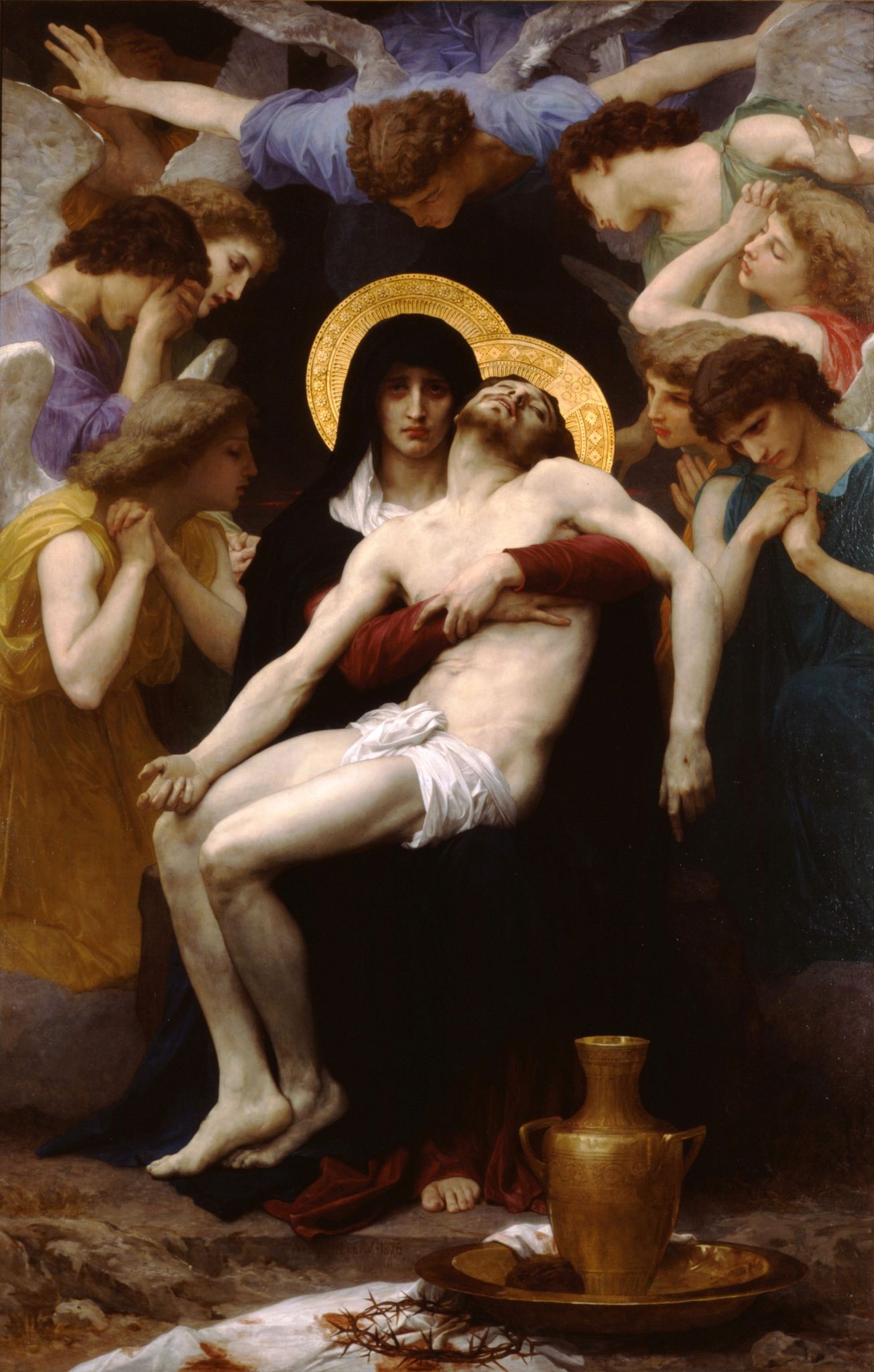 The woman carries the half-dead man on her shoulder. The woman we saw before as a pietà now appears at the moment she has picked up His body (from the cross) and carries Him on her shoulder staggering, just as He had carried His own cross before. 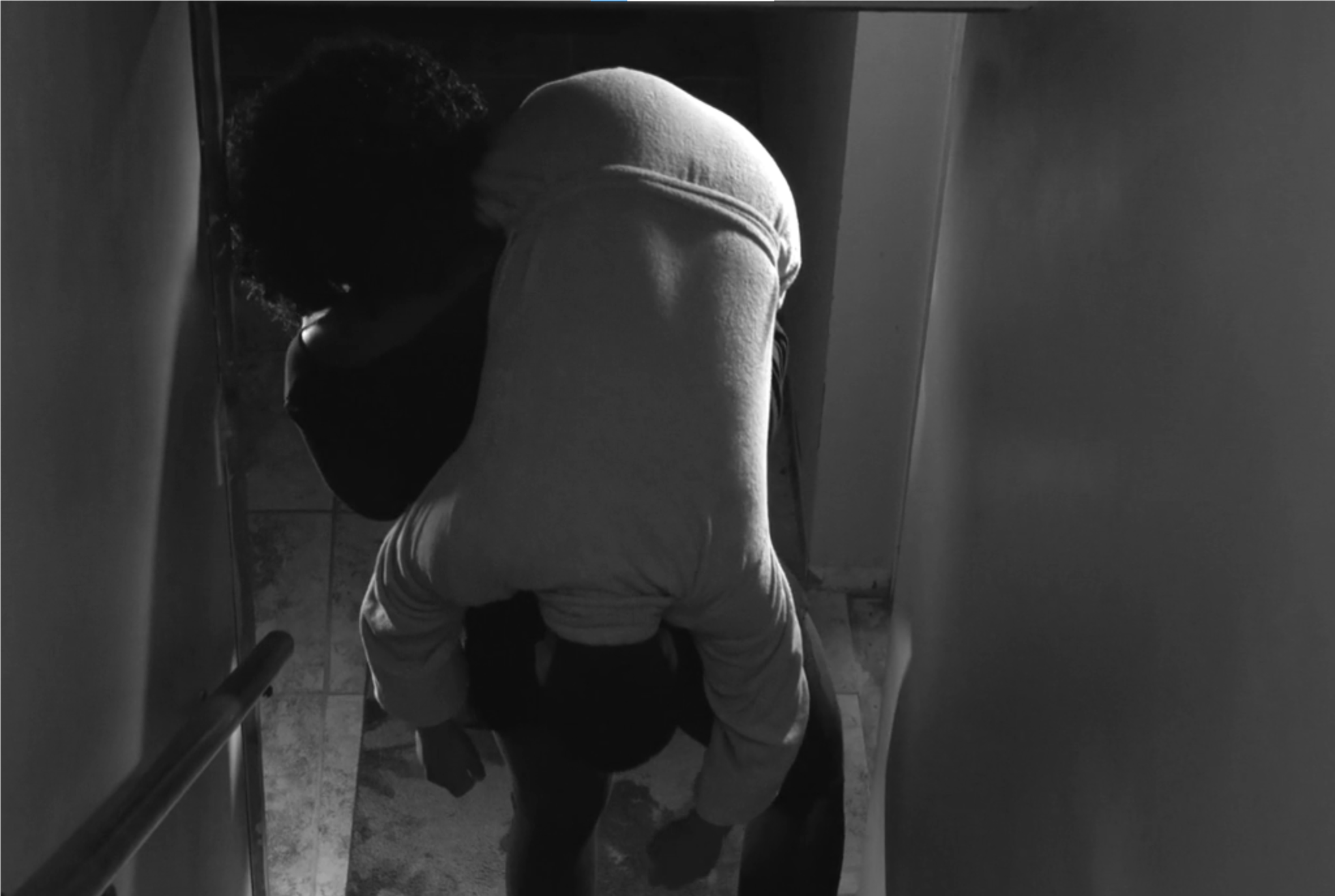 Her Golgotha is the narrow corridor of her house and a staircase.

The symbolism here goes beyond Christian teaching. This woman becomes a universal symbol of the sanctity contained in man's struggle against the great sufferings of life, against man’s own tragic fate.
Silence surrounds this daily ritual routine as a protective membrane of respect. Small thoughts, a dream occur as text scriptures and fade away in this silence. Silence is permeated by a persistent text phrase; “he appears indifferent". This phrase expresses the eternal hope that one of all these cares may incite a reaction by the paralyzed man. It expresses the human resistance to accept an "incurable" condition by making innumerable efforts to exorcise it. The “incurable” condition sadistically implies futility on human abnegation and struggle and it makes the torture more unbearable.
The film continues to record this martyrdom, which could be the martyrdom of Sisyphus. The director shows us many daily events of this painful routine, such as the woman's falls, her efforts and the agony of getting back on her feet, to hold, her fatigue, her hesitations, the instantaneous hits of doubt, her mild indignation and her instant penitence.

Suddenly an exterior shot.
The heroine staggers exhausted while moving towards “somewhere”. There is also the "outside". The suffocation from “inside” is not relieved, as the outside is darker than the inside.
There is also another person, perhaps a companion.
They walk together limping, like crumpled aged people in a dark, gloomy corridor.
Τhis walk seems difficult, slow, like climbing Golgotha.
They reach the end of the corridor. The corridor remains in the shot for a prolonged duration.
It is rather darkness than actual space.
Exhausted in two chairs, they lean on each other.
The woman rises up again.
The man stays down posting the limit of human endurance.
The woman has transcended human nature in her struggle and appears to have acquired the properties of a modern martyr, of someone who in total abnegation serves what he considers precious and worthy. Although, in appearances she has all the earthly characteristics of a modern woman, her deeds and mental power enable her with a martyr’s sanctity, with holiness.
“In her anguish she thinks earnestly, blood drips from her forehead, she wipes her face and returns home”.

The woman returns home and finds him on the floor. New text phrases on the screen inform us about the woman's attempt to raise her cross again, with the same sacred devotion, self-denial and reverence.
The movie could have ended around the 10th minute, as its symbolisms and messages have already been given. Its deliberate prolongation puts us deeper into the torturous repetition of the heroine’s routine and makes us participants in her martyrdom. The prolonged stay in the anechoic chamber of the film is a mental ordeal.
In general, “Ode to the Whale of Christ” is an extraordinary film that has a deep influence on the viewer. David Matthew Johnson makes an inventive use of silence.
By silence he totally captures the attention of the viewer, pointing out that very important, sacred acts take place here. Furthermore, he introduces a tension, which at times takes your breath away. The silence severely intensifies the viewer's emotional involvement in the drama.

The use of text phrases instead of moving images by the director, the frequent substitution of the film action by its verbal description is exquisite, inventive and original. They masterly add drama to the narrative. These text phrases function as a protective veil of respect for what is narrated. Moreover, they allow the viewers to fill and enrich them in the manner they envisage. Additionally, they offer a rhythm to the narration according to the way the director conducts them, by regulating the timing of their appearance on the screen, their position on the screen, their succession, and the pauses among them. In this manner, the director has an excellent control of emphasis in his film.
Most importantly, David Matthew Johnson manages to elevate an unpleasant but not so rare story of supporting a helpless man, to an admirable universal paradigm of human struggle and dignity. He accomplishes to lift a next door woman to a symbol of self-sacrifice and greatness. Far beyond their Christian content, these qualities are attributes of holiness, in a sense demonstrated by man who honorably struggles against insurmountable obstacles. David Matthew Johnson's film is indeed an ode to the holiness of human fight and perseverance against his tragic nature.